Mary Berry, ‘Why I love my AGA’ – The kitchen feature no country house should be without

We couldn’t resist sharing this article below with you from Country Life Blog all about why every country home needs an Aga, do you have one? Do you love yours? It’s an investment, that’s for sure, but if the queen of British Baking give it a solid A* then it’s alright in our book.

For 95 years, it’s been so much more than a cooker. Julie Harding lifts the hot plate on the heart-warming kitchen feature no country house should be without – and speaks to Mary Berry about why hers is so beloved.

‘It’s the heart of the kitchen,’ declares Mary Berry, probably Britain’s most famous Aga owner. ‘I love the warmth and the wonderful welcome. If I had to live without one, I’d loathe it.’ Reassuringly traditional yet elegantly fashionable, the enduring cast-iron Aga has become a domestic icon in the 95 years since its invention by Swedish physicist Gustaf Dalen.

Peculiarly British, like the Sunday roasts and crumbly scones it produces, people who own one appreciate the shiny, instantly recognisable exterior that’s barely changed in a century, the consistent heat that emanates from its solid frame, the exceptional taste of the comforting delights that emerge from its cavernous ovens and the fact that it can be leaned against. ‘An Aga becomes a part of the family. I can’t think of any other home appliance that sparks that kind of love. It’s utter passion,’ confirms company spokeswoman Laura James.

Former Great British Bake Off judge Mary’s fondness for the Aga began decades ago when she was invited to her London flatmate Penny Tetley’s Little Gaddesden home. ‘I learnt the theory of cooking from [Penny’s mother] Ma Block. I loved the way her Aga cooked,’ she discloses, before recalling an early culinary disaster. ‘I made a meringue layer on butter papers, but omitted to remove the papers during the assembly, which Ma Block found as she cut into it at supper.’

Mary has cooked on virtually every kind of Aga and, at the Buckinghamshire home she shares with her husband, Paul Hunnings, she has a five-oven, dual-control model in duck-egg blue, with gas-fuelled ovens and electric-powered tops. ‘Sometimes, I’m testing recipes and having people round, but a lot of the time, there are only two of us, so I can turn off parts of the cooker, which really suits me,’ she explains.

The TV cook also religiously places the beds of her dogs—labrador Millie and working cocker Darcey—at its base each night. Soggy gloves and dog towels are put on the top to dry out, as are her tree-surgeon son Tom’s ropes. 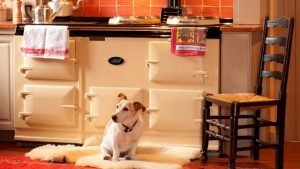 ‘An Aga has so many uses,’ says Mary, who utilises every cooking function, from the boiling plate for toasting crumpets, the roasting oven with the solid shelf placed near the top for a Victoria sandwich, the base of the simmering oven (bottom right) for pastry—as this ‘avoids a soggy bottom’—and the entire cooker at Christmas when roasting a turkey and all the trimmings.

‘I can cater for any number with the Aga,’ she asserts. ‘One trick [if you lack oven space] is to cook your roast potatoes, parsnips and stuffings the day before, then just pop them in on the day to heat up.’

In fact, Mary prefers to prepare meals ahead throughout the year and recommends one-dish recipes, such as fish pie, shepherd’s pie or roasted vegetables with sausages. ‘Today, everyone wants slow roasts—pulled pork, pork belly, lamb—because it doesn’t matter if they’re left in for half an hour too long. Any casserole done beautifully slowly is lovely, too.’

Mary does, however, have some words of warning for those inheriting an old Aga. ‘You need to be aware that the simmering oven is very slow and you’ll need to get used to it, so, if you’re cooking a casserole, start it off in a quicker oven, then move it to the simmering one. If you’re using the ovens, keep the lids down to ensure the heat stays in and the cooker runs more efficiently.’

She also advises new owners to invest in a timer so that the charred remains of last night’s supper become a thing of the past.

Fellow devotee the Duke of Somerset also confesses to occasional memory lapses involving cooking in the Aga his parents installed in Bradley House, Wiltshire, in the 1950s. ‘I’ve forgotten things and found them burnt a few days later,’ he confesses with a smile. 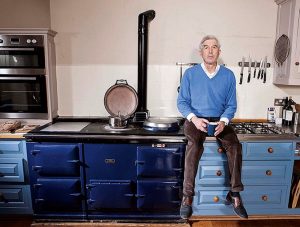 The Duke of Somerset has had an Aga since the 1950s and admits: ‘I always gravitate towards it when I’m cold’

Every morning, the Duke makes toast on the left-hand hot plate (‘without using the tennis-racket contraption’) of his royal-blue, four-oven oil Aga and is fond of popping a snipe into the top-right oven to roast for 10 minutes.

‘Although we don’t make cakes, my wife and I cook a range of main courses, from fish on the top plate to game and meat in the oven. We also always warm our plates in the bottom left.’

He remembers fetching the coal that powered the now-converted stove when he was a child. ‘I’ve grown up with the Aga and I gravitate towards it when I’m cold,’ the Duke admits. ‘We also use it for airing clothes. An Aga is a nice thing to have. It cooks things in a special way, with consistent heat that isn’t fierce although, if you’re new to one, you need to experiment, because not everything will turn out right first time.’

The Duke has never worked out how much his cooker costs to run, but Ian O’Brien of Somerset-based supplier and installer O’Briens says oil-fired Agas generally consume 40 litres (nine gallons) of fuel a week: ‘That may seem a lot, but it’s tempered by other benefits, such as not needing to use the tumble drier or electric kettle, as well as less central heating because heat from it percolates around the house.’

Over the years, the Aga’s place in our culture has extended from the kitchen to the bookshelf by becoming immortalised as a genre of romantic fiction— much to ‘Aga saga’ author Joanna Trollope’s disgust. Real Agas regularly feature in The Archers and have even inspired a series
of cartoons based around ‘Mrs Aga’.

Their creator, Bryn Parry, co-founder of the Help for Heroes charity with his wife, Emma, freely admits that, if he didn’t own an Aga, he wouldn’t be married. ‘Emma began muttering in her late thirties that, if I didn’t buy her an Aga, I’d be history,’ divulges the cartoonist. ‘She’d been brought up with one so, to her, it’s a symbol of home and hearth, but I hadn’t, so I didn’t get it.’ 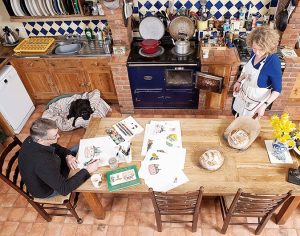 ‘Mrs Aga’ creator Bryn Parry says he wouldn’t be married if he hadn’t agreed to buy his wife, Emma, one

With a dark-blue, two-oven, gas-fired Aga installed as per a ‘private contract’ just days before Emma’s 41st birthday and his marriage secured, Bryn challenged his wife to write a cookbook, which became Home on the Range. ‘She came up with 150 recipes and I said I’d illustrate it,’ he recalls.

‘Emma said the cartoon Aga needed to have a womanly figure, so I drew curvy, smiley, maternal-looking models through the night and, by dawn, I’d given birth to Mrs Aga.’

The Parrys’ Aga is usually turned off during the warmer months—unlike Mary’s, which is only turned down. ‘There’s always a discussion about turning the Aga off,’ admits Bryn. ‘We get used to having it on, plus firing it back up isn’t easy. I have to get down on my hands and knees and usually have to get a man round.’

The couple uses a French range called Henri for cooking during the summer. ‘Henri is all brass knobs, flaming gas and flamboyance, so he’s used for stir-fries and steaks. Mrs Aga is more slow and deliberate. I see her as Mrs Bridges [from Upstairs, Downstairs] —big-busted with her sleeves rolled up, very dependable and good at baking.’ The couple both cook on their Aga, but Emma’s creations take precedence. ‘She makes wonderful walnut cakes and lemon drizzles and, every other day, produces two loaves of bread, one wholemeal and one sourdough. I eat the bread when it’s just come out of the Aga and it’s warm and delicious,’ enthuses Bryn, who’s an advocate of cooking courses for new Aga owners.

Now convinced that life without an Aga is impossible, the artist was horrified when a friend, who’d just purchased a large country house with an Aga, wanted to scrap it. ‘I persuaded him to keep it and now he absolutely loves it. It’s always worth the effort to try to understand them,’ eulogises Bryn.

Where to buy an investment property in 2017

It has never been a better time to invest!

Property investment is a very popular asset class in the UK. It is a great opportunity to build...